What is the difference between natural lawn and plastic green grass floor mats? 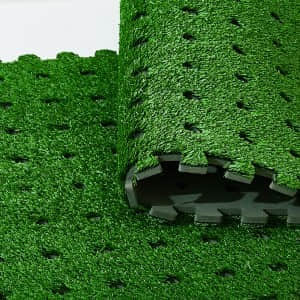 Due to the limited elasticity of the natural grass plant fibers in the natural turf football field, the overall elasticity of the football on the natural turf is small, and the height of the high-altitude ball or the rebounding ball after landing is not very high, which is convenient for players to catch, stop and control the ball. ball. However, the plastic green grass floor mat of the artificial turf football field is mostly made of plastic fibers, which determines its good elasticity, and the force of the football flying from high altitude or mid-air to bounce on it will also be great. This means that it is not easy for the player to catch, stop and control the ball if the high-altitude ball or the rebound of the ball is too strong during the game. Players are required to readjust their stopping positions and determine the rebound height and route of the football, which has an impact on the inherent skills and tactics of players.

The influence of two kinds of field friction on football When we watch the live broadcast of the game, we can often see the picture of the whole piece of turf flying off under the fierce confrontation. Don’t think that this is because the turf is not strong. The root of the turf and even the take-off of the soil play a role in each joint. On artificial turf, at most some rubber particles fly, so the joints and ligaments will bear more stress in these intense movements, which will naturally cause strains and injuries. As mentioned above, the speed of the ball on the plastic green grass floor mat is faster and the rebound is higher, which invisibly speeds up the pace of the game, and the fast-paced confrontation will also increase the probability of injury to a certain extent. At the same time, many incoming balls have a shorter reaction time for the player, and may also cause some subconscious unconventional movements, resulting in injuries. However, the flatness of the natural turf we have come into contact with is difficult to compare with the plastic green grass floor mat, and joint damage can easily be caused due to the potholes on the ground; on the other hand, playing on natural turf will make it difficult for players to do it. Impulsive actions, such as sliding shovels, barbs, etc., actually increase the probability of injury.

The lighting quality of a football field is mainly determined by the level of illumination, the uniformity of illumination, and the degree of glare control achieved. Athletes, photographers, and spectators have different requirements. The degree of glare caused by a lighting device depends on the luminous intensity and direction of the floodlight, the number of lighting devices, the position of the lighting devices in the field of view, and the brightness of the surrounding environment. There is a trend towards financial considerations in determining lighting installations. This is largely determined by the number of audience seats. The lighting standard of the venue depends on the visibility of the spectators to the athletes, not only related to the vertical illuminance but also related to the illuminance of the horizontal plane. Because the lawns of the two sites are different, the lighting standards cannot be the same.